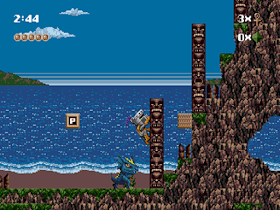 Genre: Action
Perspective: Side view
Visual: 2D scrolling
Gameplay: Platform
Interface: Direct control
Published by: SEGA of America
Developed by: Sega Technical Institute
Released: 1992
Platform: SEGA Genesis / Mega Drive
The game tells about how dangerous the virtual world can be. A new attraction, an arcade virtual game called "WildSide", arrives in one of the provincial towns. All the children rushed to play it, everything would be fine if the AI in the game did not receive a virtual mind. He began to kidnap children, it is clear for what purpose, who could not complete the game, and who could not complete it. But then Casey showed up who calls himself "Kid Chameleon". He promises to complete the game and save everyone who is stuck there.
The game is very similar in some moments to Mario, we need a head and not only break bricks from which various bonuses fall. Even at the end of the level, we, like Mario, get on the flag. The main feature is that Casey can transform into various images thanks to the helmets found in the cubes. In Samurai, Knight, Super Hero, Tank, etc. only about a dozen different personalities. Quite an unusual game with elements of Super Mario Bros.
‹
›
Home
View web version