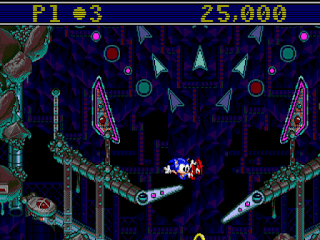 Genre: Action
Perspective: Side view
Visual: 2D scrolling
Art: Anime / manga
Gameplay: Pinball, Platform
Published by: SEGA of America
Developed by: Polygames, Sega Technical Institute
Released: 1993
Platform: SEGA Genesis / Mega Drive
Dr. Robotnik was able to turn the helpless beasts of the planet Mobius into robots in a very non-standard way. This time, he uses energy from the magma flowing under the volcano to power his new Veg-O-Fortress base with its Pinball Defense System. Sonic must make his way into Robotnik's well-fortified base, and, if possible, save the poor animals. The only way to destroy the fortress is to cause a volcanic eruption, and Sonic knows that this can be done only by collecting all the Chaos Emeralds that keep the volcano in a stable state. Having saddled the plane, piloted by his faithful friend Tails, Sonic approached the base, but on approach was shot down by a cannon shot. Managed to emerge in the Toxic Caves, somewhere under the fortress. From here it is necessary to penetrate into the very heart of the defense system.
Unofficially, Sonic Spinball is called the fifth part about Sonic, although, according to the release date, the game appeared earlier than Sonic the Hedgehog 3. It departed from the concept of a simple platformer, but this is not one of those games that go out due to a big name. This is one of the most steering pinballs I've seen in my life. Spinball strongly resembles Casino Zone from the first part of the game, in which Sonic flies across a huge pinball field. In addition to the 4 main levels, there are three mini-stages in between, pinball fans will appreciate. There is no opportunity to save somewhere in the middle of the game, but it is not needed, because Sonic Spinball is a fairly simple game, the main thing is to have a good reaction.
‹
›
Home
View web version