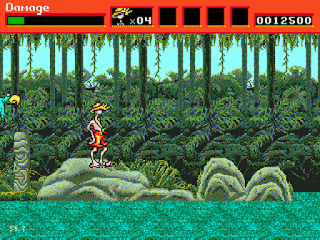 Genre: Action
Perspective: Side view
Visual: 2D scrolling
Gameplay: Platform
Published by: SEGA of America
Developed by: Interactive Designs
Released: 1992
Platform: SEGA Genesis / Mega Drive
Greendog was designed by Sega as the mascot (face) of Sega. Back when there was no Sonic the Hedgehog. Greendog is a big fan of various sports from skateboarding to surfing. But at one point he found an ancient amulet of the Aztecs, which carried a curse in itself. Now all living beings will rush at our hero. In order to remove the curse, he will have to go through a difficult path across a variety of islands and find the gold of the Aztecs. A beautiful blonde in a swimsuit told him about this.
‹
›
Home
View web version