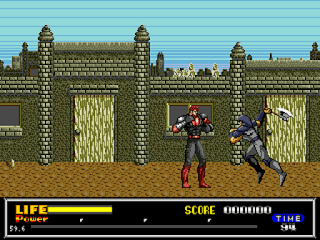 Genre: Action
Perspective: Side view
Gameplay: Arcade, Beat 'em up / brawler
Setting: Post-apocalyptic
Narrative: Martial arts
Published by: SEGA of America
Developed by: SEGA Enterprises Ltd.
Released: 1989
Platform: SEGA Genesis / Mega Drive
In the game, you play the role of a pumped-up man. The game is based on the anime series Hokuto no Ken (Fist of the North Star), which is famous for the abundance of cruelty, violence and blood. The first (original) game was released for Japan and was called Hokuto no Ken. She was brutal enough, and well seasoned with an abundance of blood and exploding heads. But because the European and American audiences are more impressionable. The game was heavily censored and almost all scenes of violence and gore were cut out. Also, it was not possible to obtain a license for the release of the game outside Japan under the name Hokuto no Ken. Therefore, the game was renamed Last Battle. Therefore, the names of the characters had to be changed as well. So if you are not afraid of Japanese characters, then you need to play in Hokuto no Ken.
‹
›
Home
View web version