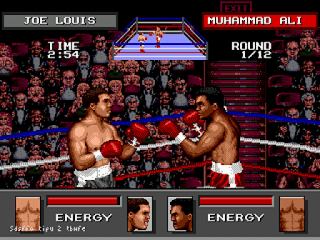 Genre: Sports
Perspective: Side view
Sport: Boxing
Published by: SEGA of America
Developed by: Acme Interactive
Released: 1993
Platform: SEGA Genesis / Mega Drive
This boxing simulator is one of the best boxing simulators in my opinion. The game is made on the redesigned Evander Holyfield game engine. The game features real-life players, eight heavyweight stars: Muhammad Ali, Jack Dempsey, Joe Frazier, Larry Holmes, Evander Holyfield, Joe Louis, Rocky Marciano, and Floyd Patterson. It is also important in the game that you can create your character from scratch, which is very rare in games for SEGA Genesis, and even more so in boxing simulators. In combat, there is a difference between blows to the head and blows to the body.
‹
›
Home
View web version