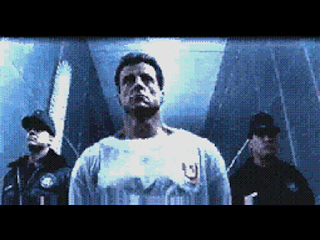 Genre: Action
Perspective: Bird's-eye view, Side view
Gameplay: Platform, Shooter
Setting: Sci-fi / futuristic
Published by: Acclaim Entertainment, Virgin Interactive Entertainment
Developed by: Alexandria
Released: 1995
Platforms: SEGA CD / Mega-CD, SEGA Genesis / Mega Drive, Super Nintendo (SNES), 3DO Interactive Multiplayer
In the game you have to go through many levels, killing heaps of opponents, during the game you will collect various bonuses. And all in order to get to the end of the main criminal Simon Phoenix. The game will have both 2D side levels and isometric levels where you have to free the hostages. The isometric levels are somewhat similar to the levels in the True Lies game for the Sega Genesis / Mega Drive. The plot of the game begins, now in the distant and beautiful 1996, when John was chasing the criminal Simon Phoenix, who kept the entire city in fear. Accidentally causes major damage to the city. John is accused of abuse of power and, along with the criminal, is imprisoned in a cryo prison. In 2032, Simon is released, and continues to rampage. The cops cannot deal with him on their own, so they have to turn to John Spartan.
‹
›
Home
View web version