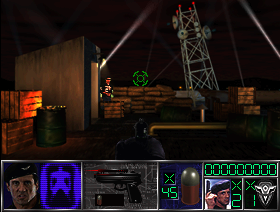 Genre: Action
Perspective: 1st-person, 3rd-person
Art: Full Motion Video (FMV)
Gameplay: Arcade, Fighting, Shooter
Setting: Sci-Fi / Futuristic
Published by: Virgin Interactive Entertainment
Developed by: Virgin Interactive Entertainment
Released: 1994
Platforms: 3DO Interactive Multiplayer, SEGA Genesis / Mega Drive, Super Nintendo (SNES), SEGA CD / Mega-CD
I do not remember the plot of the film. I remember only that Stallone froze in 1996, and defrosted in the not far future where everyone is rubbed with sea shells and everything was not so terrible as in the same Blade Force, until there Stallone with his enemy - a terrible terrorist, and concurrently dyed Wesley Snipes.
So, Stallone lit up and in the same game with the same plot, and even as in the frames of the film (it's all mixed up), and separately for the game itself, he shot and even seemed to say a few phrases typical for this kind of games.
Under the guise implied all the same interactive shooting range. What was seen before was fashionable. There were even games from almost one digitized video, like Space Pirates, The Last Bounty Hunter, Who Shot Johnny Rock? and many others, where all the interactivity was expressed in the possibility of moving the cursor and shooting at humans before they shoot you. But of the only interactive dash in relation to Demolition Man, it would be unfair to speak, there is still a kind of chopped synthesis of genres.
In total, in addition to levels with an interactive shooting range, there are also levels with pure fighting (more like a Way of the Warrior), a shooter (like Killing Time) and even an auto-simulator (certainly not Need For Speed). As a rule, the task of the last three is the goal either to find, catch up, beat, or even kill the unfortunate African-American, in order to cuddle Sandra Bullock at the end, with calm soul, and then they have all the virtual sex, and virtual sex.
By the way about sex, in the sense of virtual. In the game, it is present as an additional bonus, somewhere as well as the level with the Virgin office. Virtual sex I saw in the movie, but the level with the office had to even run (though also virtually). Generally surprisingly of course. Such a company was, I do not even believe that something could happen to it, but on the other hand, who would have thought that this would happen with Interplay? Already there, such projects were shining. Eh, the times were ... In the end, already and 3DO, in terms of the company itself, no.
However, if you drop snotty nostalgia for closed offices, Demolition Man and to this day remains one of the best games for 3DO. Moderately original, very diverse and does not seem low-budget, it is also an exclusive among other things, as the versions for other platforms differed dramatically.

In the main menu you can select:
START - start the game
OPTION - set the ratio of music and noise (MUSIC / SFX);
- complexity (MODE): EASY - simple. NORMAL - normal, HARD-complex game;
- read the control buttons for the pistol and joystick (CONTROLS): in SHOOTING GALLERIES, in tunnels (TUNNELS: → and ←, use for turns, and R and L for stepping aside), in car races (CAR CHASE) , in fights (FIGHTING: A - punches in the head, B - punches in the chest, C - kicks, L - slow, and R - fast block)
PASSWORD - here you can specify the codes listed below in the "Passwords" section to immediately go to a high level

At the title screen, hold R and rotate the D-pad clockwise until 7 splashes of blood appear on the screen. This will allow you to see blood when you shoot someone in the game.

Pause the game and press: L, A, Up, Down, R, Up
The passcode box on the screen will change to read: #PWR to indicate that the code is in place. While the game is still paused, press and hold B to get the level select to appear in the password box. With B still being held, press Up or Down to choose a stage, then release B to warp there.