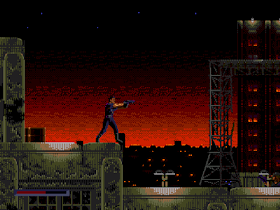 Genre: Action
Perspective: Bird's-eye view, Side view
Gameplay: Platform, Shooter
Setting: Sci-Fi / Futuristic
Published by: Acclaim Entertainment
Developed by: Alexandria
Released: 1995
Platforms: SEGA Genesis / Mega Drive, Super Nintendo (SNES), 3DO Interactive Multiplayer, SEGA CD / Mega-CD
The plot of this game is borrowed from the movie of the same name, released by Warner Bros in 1993. John Spartan - a policeman, serving in Los Angeles in the nineties of the last century. Obsessed with the hatred of the actions of the distraught terrorist Simon Phoenix, he tries to get into his lair alone. Passing through the fire, water and copper pipes Spartan overtakes Phoenix, and the terrorist is sent for jail. Only what sacrifices did it cost? Killed all the hostages held, and a bright flame flares over the city.
The Department sentences Spartan to a forty-year serving in a cryogenic cell, and the verdict is carried out. The same fate awaits and Phoenix.
Los Angeles, the year 2032. During the complete confusion, the Phoenix is ​​thawed, and he, especially without losing time, runs to freedom. But how has the world changed in the last forty years. Everyone lives in peace and idyll. No violence and looting. If you believe statistics, the last murder of a man was committed about twenty years ago, and then, as a result of an accident.
The terrorist, feeling his superiority, begins to dictate his orders. First of all, he acquires weapons obtained in the. museum. Yes, it is there. The current law enforcement agencies do not even use force methods. Nothing but fines and verbal warnings.
Neither the police nor anyone else can stop the madman. Nobody except John Spartan. After reviewing the database and reviewing the sentence of the convicted policeman, the authorities decide to release Spartan ahead of schedule from cryogenic detention.
John is also not particularly impressed with the current Los Angeles. Yearning for a lack of hot hot dogs and a normal sex life, he still decides to help citizens get rid of the insane terrorist. Only he will choose the methods of struggle himself.
Beware of Simon, the most dangerous cop of the twentieth century is following you!

Unlike the film, Spartan will have to walk around not the most pleasant places. Somehow, he manages to stroll through the muddy canalization, which is infested with far from the best inhabitants and ride on a high-speed train. What does not come up with the developers of Acclaim. In the movie, you just will not see this. All levels are carefully worked out. Their complexity increases with each stage. So, with ease passing the first three levels, do not expect that it will be the same with the next.
At two levels, the game view will change to a top view. To go through such stages is much more difficult than the others. On them you will be tasked to save the hostages. And how many firing at the enemies, immediately, remember the eight-bit Contra.
Most of the levels we have to deal with the persecution of Phoenix. What is at least the very first stage, held in Los Angeles in 1996. The aggression of a terrorist grows with every step. I do not envy you when you come across his metal claw.
When shooting for defeat in the open area of ​​the character's strength it will not be enough for the terrorist to weaken positions. There is no harm in a good reaction and increased patience.

Throughout the game, we will observe tremendous fighting. Detailed study of the terrain forces us to pay tribute to its developers. You will not see such high-quality levels in every game.
John Spartan, however, like his main enemy, Simon Phoenix, looks quite realistic. The appearance of the opposing sides fully corresponds to their cinematic prototypes. When viewing their faces on the title screen, it's hard not to find out Sylvester Stallone and Wesley Snipes.
The way Spartan skillfully handles his weapons, can not but rejoice the eye. He attacks and standing, and sitting, and on the move, and even scrambling on the slopes. Phoenix is ​​capable of any insidiousness. In this game, his actions seem much crazier than in the movies. To suppress this type will be the highest reward for us.
Special effects are performed at the highest level. Just look at how our hero, shooting a couple of thugs, famously dodges the explosion of barrels of propane. And watching the situation in the very first mission, it is felt that the flames are about to overtake the hero, and the building, half destroyed by the fire, will bury him under his debris.

In this game, the musical accompaniment will not leave you indifferent. To yourself indifferent. Dynamic music from level to level will not only raise the mood to the player, but also encourage him in a difficult moment. By the way, the developers were not too lazy to make a Sound Test, where you can once again listen to the favorite tunes from the game. Personally, I was delighted with listening to the tracks of "Rooftop", "Zipline" and "Pipe Maze".
And why only once is it necessary to hear "Heads Up" in Stallone's voice. With each rehearing the player begins to act more decisively. And what about the amazing phrase "Bad Aim Blondie", performed by the same actor? Only now it still needs to be earned.
The magnum shots are easily different from the sounds produced by the standard weapon. Such little things are also pleasant ...

Very convenient. The first time will be a little difficult with shooting on the move, but if you really want to go through this game, then be sure to learn this. The character is very sensitive to enemy attacks. For example, it can fall off the ledge due to one enemy hit. Therefore, it is necessary to observe the first rule of the game - never to hurry the course of events. If the hero needs to be on the platform, and where the enemy is located, then for the beginning does not prevent to eliminate the latter, and only then make a jump
By the way, jumping does not always turn out well, so you should practice it. I especially sympathize with you at the level with the moving train. Such dexterity as there, from you already anywhere else will not require. In general, with the management of the character no problems should arise, but still, if you feel some uncertainty, then practice in the open area. For such cases, the first level is very suitable. If you learn to pass it in three minutes, then you are fully prepared for further action.

The total time for walkthrough fluctuates around an hour. But everything will depend on your skill. Recall at least the "Comix Zone", where an inept player to go through the whole game will need twice as much time as the rest of the gamer population. The gaming experience here obviously does not hurt.
Immediately I say, do not make hasty decisions. We have a first-class action movie. To pass it, of course, is a complicated matter, but quite fascinating. It is better to lose a couple of times than to persist continuously during any level. Interest in the game from this just diminished.
The big plus of the game is its unpredictability. Namely, that you never know where the enemy will come from and what the villain will once again do. This situation is very similar in Robocop 3 for NES. But Demolition Man in this regard is breaking all records.
It is very good if you are restrained during the game, for constant losses can easily make you lose your temper. Personally, I met a dozen places where it's quite difficult to perform jumps. What is there to say for the constant lack of health of the character.
If you feel that the game is too tough for you, then in the options you can change the difficulty level to a simpler one. The difference in choice is easily felt from the first minutes of the passage. Try to pass a couple of levels on the "Total Demolition". Perhaps this is an occupation for real professionals.
It is very good that the game does not have to experience a shortage of ammunition. Standard weapons of Spartan are loaded with an infinite number of cartridges. We do not even need any modifications to easily deal with their enemies. Another thing is when a lot of enemies accumulate in one place. Here I would advise you to look at the surrounding objects. Perhaps there is an option to go for the trick, the outcome of which will leave you a winner.