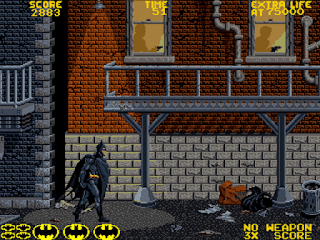 Genre: Action, Racing / driving
Perspective: 1st-person, Side view
Visual: 2D scrolling
Pacing: Real-time
Gameplay: Beat 'em up / brawler, Platform
Interface: Direct control
Vehicular: Flight / aviation
Published by: Atari Games Corporation
Developed by: Numega Team
Released: 1990
Platforms: Arcade Machine, SEGA Genesis / Mega Drive, Nintendo (NES), Amstrad CPC
Batman must save Gotham City from the Joker. The plot is based on the 1989 film of the same name. It features stages based on locations from the movie, including stages with the Batmobile and the Batwing. The game features realistic sounds and voices from the movie. The soundtrack is based on Danny Elfman the film's score. Batman has various weapons, such as gas grenades and batarangs at his disposal, as he takes on various thugs and the Joker himself.
‹
›
Home
View web version