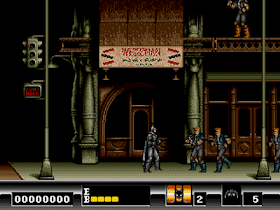 Genre: Action
Perspective: Side view
Visual: 2D scrolling
Gameplay: Platform, Shooter
Published by: Sun Corporation of America
Developed by: Sun Electronics Corp.
Released: 1991
Platforms: SEGA Genesis / Mega Drive, Arcade Machine, Nintendo (NES), Amstrad CPC
The gameplay is pretty simple - from left to right: the score counter; life scale (consists of 8 bars), above it is the life scale of bosses, which also consists of 8 bars; number of lives); Batarang. Batarangs, the scale of health and life can be replenished during the game, finding them on your way, or in some secret places. The lives are depicted as icons with the head of Batman, a lifebar in the form of yellow hearts and a bataranga in the form of a bat sign.
Batman can fight with his fists, foot (squatting), and there is also a jump on the enemy from above. Batarangs can attack enemies from a distance.
The game also contains in-game inserts - at the very beginning, the story of the beginning of the confrontation is told, then after the level of the Flugelheim museum, the developers decided to make an insert of Batman's spectacular (film-based) departure from the battlefield - he saves the reporter Vicky Vale by flying out with her at the museum doors on his zipline ... "And where did he get such cool toys!" - exclaims the Joker after Batman's "flight". And the final insert - lying on the ground, thrown from the roof of the cathedral by Batman Joker.

Batman is guarding Gotham City, fighting crime. The Boss of the Gotham mafia was subordinate to a certain Jack Napier, leading a criminal gang and part-time "walking" with his Boss's girlfriend. The boss, noticing this intrigue, decides to punish Jack by setting up a raid on Axis Chemicals. Batman also does not stand aside from this operation and decides to take the most direct part in it in order to catch Napier and his henchmen. And he succeeds, but not quite. Trying to fend off the ubiquitous Batman, Jack Napier shoots him with a revolver, but Batman ricochets the bullet with his glove, the bullet hits Jack, and he literally hangs on a huge vat of acid. Batman's attempt to save Napier is unsuccessful, and he falls into acid. But it survives. Due to numerous injuries received from such a harmful product, Jack's body is disfigured, nerve endings are damaged, and a smile that never subsides shines on his face. This is how the main villain of Gotham and Batman # 1's opponent appears - the Joker, who immediately, after his reincarnation, begins to restore order in the city, killing his Boss first. From this moment, the confrontation between Batman - the world's best detective and his insane and powerful enemy Joker begins.
‹
›
Home
View web version