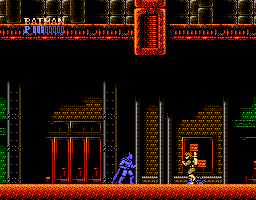 Genre: Action
Perspective: Side view
Visual: 2D scrolling
Gameplay: Platform
Published by: Sun Corporation of America
Developed by: Sun Electronics Corp.
Released: 1989
Platforms: Nintendo (NES), Arcade Machine, SEGA Genesis / Mega Drive, Amstrad CPC
A dark knight on the streets of Gotham fights fiercely with the Joker's minions. The hero can beat the enemies with his fists, and also use weapons with limited ammunition - boomerangs, a pistol, powerful flying disks. Batman also knows how to climb higher, clinging to the walls. The mechanics and complexity of the game is close to Ninja Gaiden, and the atmosphere in it is also gorgeous. The gloomy streets of Gotem, appearing to us in an 8-bit style, like in the film, frighten and fascinate at the same time. A worthy embodiment of the story of the Dark Knight on the NES.