The Fantastic Adventures of Dizzy (NES) 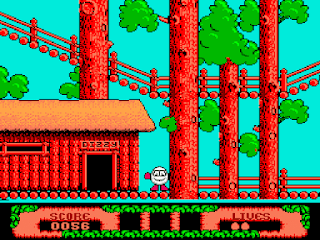 Genre: Action
Perspective: Side view
Visual: 2D scrolling
Gameplay: Platform, Puzzle elements
Published by: Camerica Limited Inc.
Developed by: Codemasters Software Company Limited
Released: 1991
Platforms: Nintendo (NES), SEGA Genesis / Mega Drive, SEGA Master System
Dizzy is ... an egg. Sentient egg with a face, handles in boxing gloves, dressed in sneakers. Like most sentient beings, he has a bunch of kinsfolk, as well as one and only friend - Daisy. All intelligent eggs live on trees, but unlike monkeys, they do not jump from branch to branch, but build cozy houses in the crowns.
The eggs lived with their whole friendly family quietly and peacefully, they led a measured life, they were not particularly limitless and did not play tricks. But suddenly the evil sorcerer Zaks appeared and spoiled the eggs from all his filthy soul. He paralyzed his grandfather Dizzy, turned his sister Dora into a frog, put Dozy to sleep, froze Denzil, and Dylan, seeing such a thing, moved a little and, out of quiet sadness, began to court for little animals. In general, Dizzy had to take on a harmful magician with his own hands and save his girlfriend. Only first you need to fix all his dirty tricks.
The game is essentially a quest performed by an arcade platformer. You need to go and solve tasks for quick wits, look for all kinds of objects and use them for their intended purpose. The game very successfully combines moments where you need to actively wiggle your brains and fingers on the joystick, so you won't be bored in any case. For example, additional lives (5 pieces) can be obtained by solving a puzzle where you need to collect a picture with a magic poetic spell in a very limited time.
Dizzy's controls are simple, the set of actions is also, but the set of items is just huge, despite the fact that you can carry no more than three at a time.
Graphically, is flawlessly executed. The artists tried their best, and the result was impressive - an inquisitive eye will notice many small but pleasant details in the game. Depending on the time of day, the background of the landscape changes, and the landscape itself is drawn with love. All this splendor is accompanied by pleasant music that changes depending on the scene and evokes the appropriate mood.
Perhaps the only drawback of the game is that it is oh-oh-very long, and the developers did not foresee the possibility of saving. Without acceleration, the entire process of passing will take about four hours, provided that you know what and where to carry, and if you don’t know ...
So, all fans of quests and platformers are strongly advised to play "The Fantastic Adventures of Dizzy". Even if you do not belong to this category of players, try this game anyway, it is great.
‹
›
Home
View web version