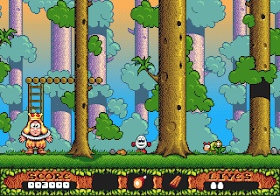 Genre: Action
Perspective: Side view
Visual: 2D scrolling
Gameplay: Platform, Puzzle elements
Published by: Codemasters Software Company Limited
Developed by: Codemasters Software Company Limited
Released: 1993
Platforms: SEGA Genesis / Mega Drive, SEGA Master System, Nintendo (NES)
"Dizzy was captured by the evil sorceress Sachs, only Dizzi is brave and smart enough to save her from a terrible fate." Leaving the Valley of Ilosfolke trees in safety, Dizzy embarks on his magnificent journey! "
So this game does not start out intricate. Looking at it, it's hard to imagine that this thing has such deep roots: it was seen on the ZX Spectrum. This is a logical game, built in the genre of adventure. You have to play for an egg (? !!), which collects various objects and thinks where to put them. Despite the seeming delirium, the gameplay captures and makes you think logically, especially when you have a problem of moving on the plot. This game is a real challenge to the "gamer-quests". Also here you can note excellent graphics, great sound and music. I do not advise you to skip this game!
‹
›
Home
View web version