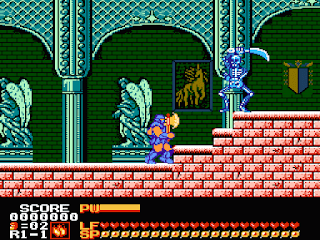 Genre: Action
Perspective: Side view
Art: Anime / manga
Gameplay: Platform
Setting: Fantasy
Published by: Jaleco USA
Developed by: Jaleco Ltd.
Released: 1990
Platform: Nintendo (NES)
Every night, sixteen-year-old Astyanax had a dream: an unknown girl called him for help. He did not understand what this dream meant, and did not know who this beauty was. Once Astyanax was returning home from school and suddenly heard a voice calling his name. At one point, everything around went dark, and our hero woke up in an unknown place, and instead of ordinary clothes he was wearing armor! A Fairy appeared in front of him, telling that the girl from his dreams is a real princess, an evil wizard kidnapped her and only you are able to save her. A weighty argument was the statement that only a princess is able to bring a teenager back into his world. So, taking a golden ax, our hero set off on a fateful journey ...
This is the backstory for one of the best games on the NES platform. The main weapon of the hero is an ax, which, with the help of bonuses, is pumped to a more powerful arsenal. You can also use three spells: stop time, fireballs and lightning strike. For successful passage, it is better to save mana for bosses.
The game is very addictive and interesting, graphics and sound are at their best, you just start playing and feel the patriotic notes of the music !. We can say that Astyanax is as cool and necessary game in terms of popularity and quality of performance as the games of the Golden Axe series for SEGA Genesis. The theme of the games is the same, only in "Astyanax" there is no possibility of simultaneous play together, and the game action is reduced to a platformer. Between the levels, beautiful cinematic inserts are shown that explain the development of the plot.
‹
›
Home
View web version