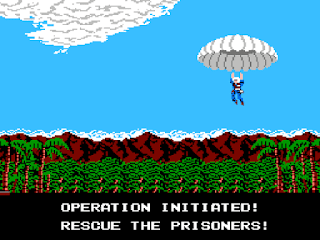 Genre: Action
Perspective: 1st-person
Visual: 2D scrolling
Gameplay: Arcade, Rail shooter
Published by: Taito America Corporation
Developed by: Taito Corporation
Released: 1989
Platforms: Nintendo (NES), Arcade Machine
The goal of the game is to free five prisoners of war held in a concentration camp. Game levels are flat terrain that moves slowly across the screen. Enemy soldiers and military equipment (trucks, armored personnel carriers, helicopters) move around the terrain, leading heavy fire on the game character. The player, controlling the cursor, should, if possible, quickly shoot the enemy so that his player character receives minimal damage. Ammunition is replenished by shooting at the appropriate icons that appear on the screen (mainly in the place of killed opponents). Also, bonuses can be obtained by shooting birds, chickens and pigs flying on the screen. For fire on civilians (orderlies and prisoners of war), the player loses health.
Enemy soldiers, in addition to firing firearms, can throw hand grenades at the player and throw knives, which the player must shoot at the approach. The screen displays the amount of ammunition of the player, as well as a bar-indicator of the hero's health.
The game has six levels:
After passing each player, there will be a fight with a boss (usually a unit of heavily armed vehicles).
After passing all 6 levels, the game continues but with a higher level of difficulty and the number of enemies.
The game also has a seventh, secret level. You can get to it if you repeatedly press the Select and J-Pad buttons during the selection of levels on the second, unused controller. The peculiarity of this level is the immobility of the camera (the player does not move). After completing it, the player is credited with completing one of six levels (which is located on the selection screen in the upper right corner).
‹
›
Home
View web version