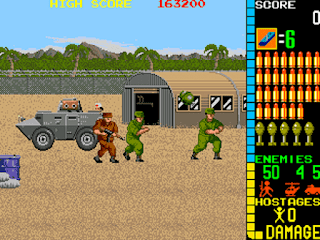 Genre: Action
Perspective: 1st-person
Visual: 2D scrolling
Gameplay: Arcade, Rail shooter
Published by: Taito Corporation
Developed by: Taito Corporation
Released: 1987
Platforms: Arcade Machine, Nintendo (NES)
The objective of the game is to rescue 5 prisoners from a concentration camp. The game is divided into 6 stages: Communication Setup, Jungle, Village, Powder Magazine, Concentration Camp, and Airport. You have to finish each of the stages in order to be able to advance to the next one, being one of the first shooters that had a plot line.
To complete each stage the player must shoot as many soldiers, tanks, jeeps, helicopters and boats as the game indicates.
Soldiers can launch grenades and knives, and vehicles can launch missiles and rockets. The player's ammo and grenades are limited but can be achieved by shooting barrels, bushes, and animals like chickens and pigs. Sometimes a faster machine gun appears in rate of fire with infinite ammunition in a limited time (for 10 seconds). The player has a damage bar that indicates how injured he is. Every time a civilian or hostage is hit or injured, it is counted in that bar.
Upon successful completion of the game, former United States President Ronald Reagan congratulates us personally, ushering in another even more difficult round of the 6 stages.
When the game is completely finished a statistic of time, shots, enemies and percentage of success is shown.
‹
›
Home
View web version