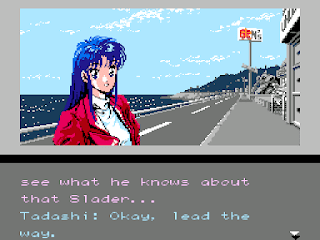 Genre: Adventure
Gameplay: Visual novel
Published by: HAL Laboratory
Developed by: HAL Laboratory
Released: 1991
Platform: Nintendo (NES)
Metal Slader Glory is a graphical adventure game where the player interacts with the protagonist's surroundings through selectable commands in a menu. The commands vary contextually, allowing everything from talking to other characters to investigating the environment. The player must explore all possible options for new options to appear. However, if the player makes a wrong choice, the game ends and the player must resume the game where he left off. The player can leave the game at any time and continue later through a password system.

The game takes place eight years after a great war between space colonies, with peace returning to reign on Earth. The main character, a 17-year-old orphan named Tadashi Himukai, buys a robot worker used to start a construction company with his girlfriend, Elina Furfa. However, when the robot is activated, its disguise drops and reveals a Metal Slader combat model, which was thought to have been dismantled after the war. A mysterious message is displayed in the cockpit: "Earth in danger... Seek the creator." Driven by this warning, Tadashi, his sister Azusa, and Elina go out into space to find answers.
‹
›
Home
View web version