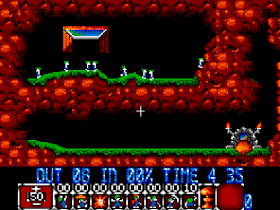 Genre: Action, Puzzle
Perspective: Side view
Visual: 2D scrolling
Gameplay: Platform
Interface: Point and select
Setting: Fantasy
Published by: SEGA Enterprises Ltd.
Developed by: DMA Design Limited
Released: 1992
Platforms: SEGA Master System (MS), 3DO Interactive Multiplayer, DOS
Lemmings is a gorgeous, intriguing game in which you have to help hordes of goofy but adorable green-haired creatures known as Lemmings to escape hostile environments in over a hundred unique adventures. The unfortunate rodents are overpopulated, therefore, the expanded population is looking for a new home for itself, migrating from place to place. The addictive puzzle game was developed by DMA Design and published by Psygnosis in 1991 for the Amiga. With lightning speed, it was ported by legal and unofficial means to dozens of gaming platforms, and several sequels were also created.
Lemmings drop out to each level through the opening doors of the hatch. As creatures not burdened with intelligence, they need any help available in order to survive among the dangers that lie in wait for the circle, and to get to the exit. They are as cute as they are goofy. Without further thought, the animals will walk off the cliff, into the water, dangers and traps. And if nothing threatens them, then they will simply walk in a crowd back and forth, changing direction every time, bumping into obstacles. We have to help them, endowing some furry animals with unique skills that help the entire population survive. Some will dig passages, others will prohibit movement towards dangers, others will build steps, others will fly on umbrellas, climb walls, etc. - only 8 skills. Naturally, the number and variety of skills, the time and number of lemmings at each level is different. So it is very important to save, if not all, but the majority necessary to move to a new stage.
The game Lemmings is mega popular, therefore, its variations are countless. The original game has 120 levels, divided into 4 groups of 30: Fun, Tricky, Taxing and Mayhem. Two players have access to 20 levels. For computers, the second player would steer an additional mouse or joystick, but for SEGA Genesis / Mega Drive and SNES there was no need to invent anything. It's strange that the 3DO version is only for one.
‹
›
Home
View web version