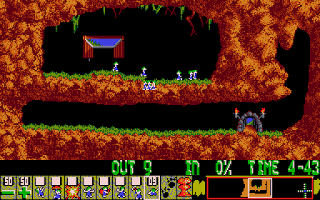 Genre: Action, Puzzle
Perspective: Side view
Visual: 2D scrolling
Gameplay: Platform
Interface: Point and select
Setting: Fantasy
Published by: Psygnosis Limited
Developed by: DMA Design Limited
Released: 1991
Platforms: DOS, 3DO Interactive Multiplayer, SEGA Master System, SEGA Genesis / Mega Drive
It so happened that I really love biology. He taught her over the years, and quite successfully. So, if my memory serves me, at the beginning of my "career" as a biologist, I read that lemmings are such adorable rodents, something like our dear and domestic mouse. What is so special about them? And the fact that these creatures, living somewhere in the north, now and then throw themselves off the cliff with the whole herd. Scientists have been fighting this mystery for more than a dozen years.
Well, the guys from DMA Design did not study biology. Therefore, they have lemmings - it is something like little men, in purple toe-length clothing and with green hair. Punk, apparently. What do they have in common with the rodents of the same name? Craving for cliffs ... And your task is to prevent the population of non-lemming from their suicidal tendencies. This is done quite simply. The whole mob stomps to the cliff - we tell the first one to open the umbrella. Ahead is the wall - we get the shovels. Well, and similar uncomplicated actions.
‹
›
Home
View web version