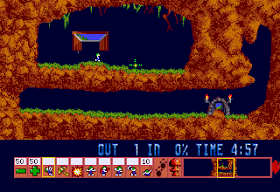 Genre: Puzzle
Perspective: Side view
Visual: 2D scrolling
Pacing: Real-Time
Interface: Point and Select
Published by: Psygnosis Limited
Developed by: DMA Design Limited
Released: 1994
Platforms: 3DO Interactive Multiplayer, SEGA Master System, DOS, SEGA Genesis / Mega Drive, Super Nintendo (SNES)
Lemmings is a great intriguing game in which you need to help hordes of stupid, but charming creatures with green hair, known as Lemmings, to avoid a hostile environment in more than a hundred unique adventures. In unfortunate rodents overpopulation, therefore, the overgrown population is looking for a new home, migrating from place to place. An exciting puzzle was developed by DMA Design and published by Psygnosis in 1991 for the Amiga. Lightning its legal and unofficial ways ported to dozens of gaming platforms, and, also, several sequels were created.
Lemmings fall on each level through the opened hatch doors. Being beings who are not burdened by the intellect, they need any available help to survive amid the dangers lurking around and get to the exit. They are just as lovely as they are stupid. Without further thought, the animals will walk from the cliff, into the water, dangers and traps. And if they are not threatened, they will just walk the crowd back and forth, changing direction each time, bumping into obstacles. We have to help them by empowering some furry animals with unique skills that help to survive the entire population. Some will dig holes, others will prohibit movement to dangers, others will build steps, the fourth will fly on umbrellas, climb walls, etc. - Only 8 skills. Naturally, the number and variety of skills, time and number of lemmings at each level. So it is very important to save, if not all, but the majority needed to move to a new stage.
Game Lemmings mega is popular, therefore, and variations it is not considered. In the original game 120 levels, combined into 4 groups of 30: Fun, Tricky, Taxing and Mayhem. There are 20 levels available for players. For computers, the second player was steering an additional mouse or joystick, and for Mega Drive and SNES, there was nothing to invent. It's strange that the 3DO version is only for one.

The myth of the mass suicides of lemmings came about thanks to the efforts of the creators of the Disney documentary film "White Wilderness" of 1958. It described the mass migration of lemmings, and for greater effect, the group of beasts was pushed from the rock into the water. The actions of filmmakers should be condemned, but it is thanks to them that lemmings immortalized themselves in the ingenious game of all times and peoples.