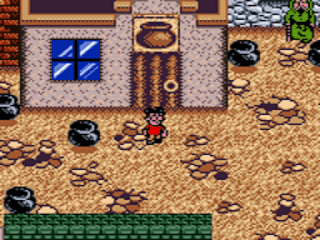 Genre: Role-Playing (RPG)
Perspective: Bird's-eye view
Pacing: Turn-based
Setting: Fantasy
Published by: Electronic Arts
Developed by: Griptonite
Released: 2001
Platforms: Game Boy Color (GBC), PlayStation (PSX, PS1)
The plot largely repeats that of the book: replicas of characters, inscriptions. Diagon Alley is well implemented: there you can find the shop of Madam Malkin, Owl, Ollivander's, Flourish and Blotts and others. The wand selection scene is well implemented. But there are also a lot of digressions in the game that are typical for games of this genre: in almost every location, Harry has to fight with the help of spells (at the beginning of the game Harry shouldn't know them yet!), Collectible cards, and potions. Rivals are rats, bats and the so-called "bosses", for example, in Gringotts, which is a fairly large maze, Harry has to repeatedly fight these animals. If the boy's strength is exhausted before overcoming the next fragment of the labyrinth, he has to return to Diagon Alley - after falling to the ground, he ends up in the pharmacy and after taking the medicine, he has to go through the stage again. During the passage, attention will not be superfluous: when buying any things, you need to take into account their value, and he has nowhere to take extra money.

Given the platform's capabilities, the characters are great: Harry can be identified in a matter of seconds, Hagrid is immediately recognizable. Some of the characters can only be identified during a conversation: at the same time, an enlarged portrait of the speaker is located in the lower left corner of the screen, but Ollivander barely resembles that from the movie - the developers seem to be more focused on the book (or the game scenario).

The music is somewhat reminiscent of that of the film, but with a very characteristic sound - a feature of the platform. Many events are accompanied by music-style sound effects.
‹
›
Home
View web version