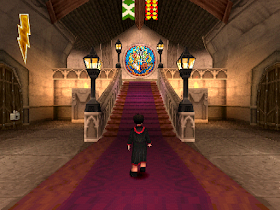 Genre: Action
Perspective: 3rd-person
Gameplay: Puzzle elements
Setting: Fantasy
Published by: Electronic Arts
Developed by: Argonaut Games PLC
Released: 2001
Platforms: PlayStation (PSX, PS1), Game Boy Color (GBC)
The plot of the game does not deviate from the original film or book, and also tells us about the young eleven-year-old wizard Harry, who entered the Hogwarts magic school. Throughout the game, we will be given various quests, which in one way or another approach us to the final battle with Volan de Mort. The plot is linear, but the player can freely move through the castle and explore it, although he cannot get to some places until he learns a certain spell. The game is rich in various mini-games, interesting plot inserts, cutscenes.
‹
›
Home
View web version