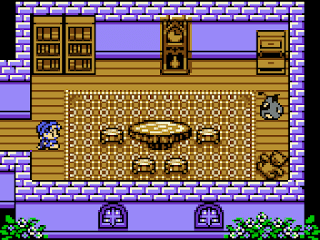 The player controls a character named Terry, who is engaged in the taming and training of wild monsters used in battles. Monsters, as in other RPGs, gain experience points after each battle and grow in levels, due to which their personal characteristics, such as attack power, defense, agility and intelligence, increase. Also, as a result of increasing levels, monsters receive new magic spells, each can own eight varieties, and if the limit is exceeded, it is possible to forget the old magic in favor of the new one. Different monsters have different development ceilings, they only grow to a certain level. New monsters are added to the squad either by taming, when, during a battle with wild individuals, the character throws meat at them, or by mating two existing individuals. After mating, both parents leave the squad, leaving behind an egg - then a completely different creature appears from it, but with some features from the parents. For example, if the monster father had a high resistance to fire attacks, then the monster son can inherit this trait, in addition, in the course of development, he sometimes recalls some spells that his parents once possessed.
The game does not have a world map familiar to RPGs, and navigation between locations is carried out through magical portals that instantly transfer the hero to one area or another. Most of the portals are located in the basements of the royal castle and are required to pass, however, in other parts of the kingdom you can find additional optional portals that open after certain conditions are met. For example, a girl in the library allows you to go to one of the portals if more than a hundred different monsters visit the protagonist's squad. Each location consists of several randomly generated territories, the character travels through them, fights against wild monsters and trainers on the way, collects scattered objects, checks treasure chests. Having found a portal in one territory, he gets to the next, and at the very end of the location he must meet the boss, the victory over which leads him back to the castle.
In order for the king to open the other rooms of his basement with portals to the hero, Terry must regularly participate in tournaments in the local arena. Having paid the entrance fee, the character consistently confronts three opponents, and in these battles, unlike ordinary ones, it is impossible to use inventory items - the monsters are left to themselves. After passing all the story portals, the hero gains access to the last tournament in the arena, and winning it is the main goal of the game. The game does not end after the final credits, if desired, the character can be returned to the magical world to go through previously missed portals and some new ones that open only after overcoming the main storyline.

In terms of the plot, the game can be considered a prequel to Dragon Quest VI, since the main characters here are the characters from there - brother and sister Terry and Millie, the story unfolds during their childhood. One night, an evil monster suddenly appears in their bedroom and kidnaps Millie, but soon another monster, a kind one, comes into the room and invites Terry to go in search of his sister in the magical kingdom of the Great Tree. Finding himself in a new reality, the boy meets the local king, and he advises him to become a trainer of monsters to participate in the legendary championship - the winner of this tournament has the right to make any wish. Terry agrees and, having received the simplest slime as the first monster, sets off on a long journey in order to find new monsters and develop them into a combat-ready squad.
Having overcome many obstacles, the protagonist becomes a famous master of monsters and gets the right to participate in the legendary championship. Defeating all his opponents, in the final Terry unexpectedly meets his own sister, who, as it turned out, ended up in a neighboring kingdom and became exactly the same trainer of monsters. Having defeated Millie's monsters, the hero makes a wish - to return home with his sister. Children wake up in their room, but, despite similar memories of the wizarding world, they decide that they all dreamed about it.
‹
›
Home
View web version