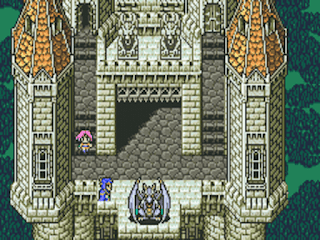 Genre: Role-Playing (RPG)
Perspective: Bird's-eye view
Visual: 2D scrolling
Art: Anime / manga
Pacing: Real-time, Turn-based
Gameplay: Japanese-style RPG (JRPG)
Interface: Direct control, Menu structures
Setting: Fantasy
Published by: Nintendo of America Inc.
Developed by: Square Enix Co.
Released: 2006
Platforms: Game Boy Advance (GBA), Super Nintendo (SNES)
I'll go through the technical side of FFV Advance below, but right now on the core of the game, that is, classes. Four new ones appeared, but no one laid them out for free access. Three of them you will receive towards the end of the game in the underwater cave: this is a cannoneer, a demolition and a sniper in one bottle; the gladiator is, in fact, the most physically advanced class of the game; and, finally, the oracle - a very entertaining kind of magician, able to reduce random encounter and predict all kinds of failures and cataclysms to the enemy. The fourth work with such a familiar and pleasing name "necromancer" is hidden very skillfully - to get it, you need not only to get hold of the three previous ones, but also to defeat the final boss of the secret labyrinth, Enuo. The necromancer may not be the most powerful, but he clearly has more abilities than anyone else. However, most of his spells must be found again. Also, the developers were not too lazy to make it undead with all that it implies - however, you still have to live to gain the ability. So, it is not possible to heal it using traditional methods (during a battle, but not on the map!), So use indirected methods (blue magic white wind, protect ring, banal sucking energy from enemies or completely restoring vitality spell death). Especially for such a cute, albeit not quite alive, comrade, the developers have even provided for a separate dungeon, Cloister of the Dead, although in fact it comes down not to wanderings, but to banal meat - six floors, you will not find without respite at every battle with five bosses.
Similar to previous GBA remakes, FFV Advance has been re-translated. In principle, the very presentation of the plot and from this practically has not changed since 1992, however, many of the dialogues and remarks of the NPCs have been re-translated, and therefore they began to give Americanism (see screenshots as an example). Good or bad - it's hard to say, because everyone was not translated by Working Designs (for the deceased), but the translation has a positive side - it does not give off sterility from a few kilometers away, as it sometimes could be in the days of the NES / SNES. The translation of proper names was also not without incidents - I will not go through the names of monsters because of the multitude of them, but I cannot note the mutations of the spells FrogSong and TinySong. For the highlight of the program - the first spell turned into Pond`s Chorus, and the second already into the lofty Lilliputian Lyric. Beauty and nothing else. In the names of the classes, only common sense changes took place - the hunter became a ranger, and the mediator, who had nothing to do with auto parts, finally became a beastmaster, and the one who did not have a job (i.e. normal) received the pretentious name of freelancer.
Trying to gag about the technical execution of the remakes is also, in general, rather ungrateful, because very little has changed. There are a minimum of changes on the map, except maybe more colors. In battles, the background was redrawn, and in some places the enemies, however, more often ordinary ones (compare screenshots with Siren in the versions of the game for SNES and GBA). Music and sounds have changed even less. Which is logical, because in the case of FFI & II: Dawn of Souls, the originals were 8-bit.
It would be possible to make two variants of the ending in the image and likeness of the introduction, but for greater simplicity, you can take something in between these for FFI & II: DoS and FFIV Advance. For the rest in Square Enix is not the same as in the fourth, but even before Dawn of Souls is still a shortage. Personal though, thanks for the necromancer. What remains is Final Fantasy VI Advance, the last RPG on the GBA.
‹
›
Home
View web version