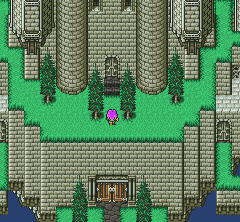 Genre: Role-Playing (RPG)
Perspective: Top-down
Art: Anime / Manga
Pacing: Real-Time, Turn-based
Setting: Fantasy
Published by: Square Co.
Developed by: Square Co.
Released: 1992
Platforms: Super Nintendo (SNES), Game Boy Advance (GBA)
A fifth of the legendary epic on Super Nintendo, a system that brought this series to a great future. Final Fantasy games for Snes were not just mentioned as the golden age in the history of this brand. The plot part tells us about a young man named Batz, wandering aimlessly around the world with his faithful companion Chocobo. His love of wandering involves him in a dizzying story, twisted by unpredictable vicissitudes. The meteorite falls in the kingdom, the young girl is attacked by goblins, the old man is unconscious on the ground, etc., all in 10 minutes of our hero's life. The history is promising. The world of the game consists of two planets, located in parallel universes. The four most powerful warriors of one of the worlds were sealed by the power of the four crystals of the powerful magician Exdeath. After a while, the crystals began to crack, releasing evil to freedom. So, new heroes will have to perform a feat in the name of saving all mankind. The plot line is not the only thing that is realized incomparably in this part. The gameplay allows you to choose classes for characters, this is the main feature of this version of Final Fantasy. That's why the composition of the characters should be unchanged and the whole team will consist of four people throughout the game. The graphics are good for Snes. The spells look great. Music has improved in comparison with the previous parts, like many other components. This part has a lot in common with Final Fantasy III on Nes and many fans will enjoy this product.
‹
›
Home
View web version