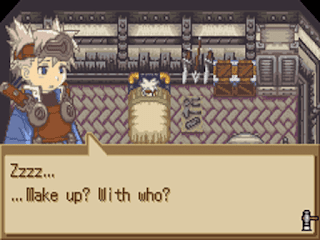 Genre: Action, Role-Playing (RPG), Strategy / tactics
Perspective: Side view, Top-down
Pacing: Real-time
Published by: Atlus U.S.A.
Developed by: Flight-Plan Inc.
Released: 2006
Platform: Game Boy Advance (GBA)
You are the scion of the heroically deceased Craftlord Shintetsu, who decides to take part in the tournament in order to win the title that previously belonged to his father. One of the four Guard Beast will come to your aid, which will help you reach incredible heights in the art of blacksmithing, as well as reveal several sinister secrets ...
During the game, you have to explore a huge dungeon, simultaneously digging into the essence of what is happening, fighting various monsters, as well as numerous contenders for the post of Craftlord. Fights take place in separate arenas, but completely in real time and resemble rather a simple fighting game or bitemap with the ability to use magic. One of the most important elements of gameplay is crafting - the collection of various materials and the creation of weapons from them. Graphically, the game is very cute. The music is good, although the melodies sound rustic. The game can be recommended to both RPG fans and those who are just starting to get acquainted with this genre.
‹
›
Home
View web version