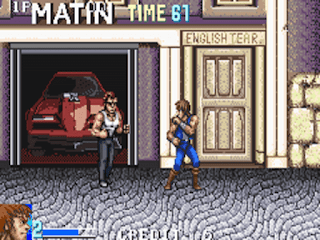 Genre: Action
Perspective: Side view
Visual: 2D scrolling
Gameplay: Arcade, Beat 'em up
Interface: Direct control
Published by: Atlus U.S.A.
Developed by: Technos Japan Corp.
Released: 2003
Platforms: Game Boy Advance (GBA), SEGA Master System (MS), Atari 7800, Arcade Machine, Nintendo (NES), SEGA Game Gear (GG)
The Double Dragon series has known its ups and downs. What happened on the GBA? In theory, this is a remake of the first part, but it also incorporates the features of other parts of the series. In the course of our favorite blows with your head forward and elbow back from the first part. There is a stage on the roof of a racing truck from the SNES. Even the jump from above from the series about Kunio-kun is present here. The character outwardly resembles Bruce Lee and perfectly controls such a Chinese weapon as a Three-section staff. Great game!
‹
›
Home
View web version