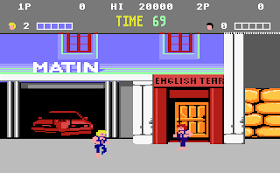 Genre: Action
Perspective: Side view
Visual: 2D scrolling
Gameplay: Beat 'em up / Brawler
Published by: Activision
Developed by: Technos Japan Corp.
Released: 1989
Platforms: Atari 7800, Arcade Machine, SEGA Master System (MS), Nintendo (NES), Game Boy Advance (GBA), SEGA Game Gear (GG)
One of the cult games. Great fighting! Masters of martial arts, brothers Billy Lee and Jimmy Lee again go out to the troubled streets of their hometown. Knowledge of street fights makes them the walking machines of death. Beloved Billy - Marion was kidnapped by the brutal street group of Shadow Warriors, led by the Boss of Darkness. To rescue your beloved, you need to kill the leader of the gang. At the same time along the way, you can learn from Willy's steroid ambail. On the street, sometimes knives and barrels are lying around - they help out a lot.
In comparison with the version for Nintendo, this Double Dragon looks unhappy. No wonder, the game from Activision, and this company has already been sorrowful with the version of Double Dragon for Atari 2600. Background graphics are scant. Simple, repetitive music quickly pestering. The fighters are angular, have six strikes, but the control is failing, so most often a flying kick is used. In the 80's, when games of this kind were especially appreciated, the Atari 7800 could not be anything pleasant to surprise the players.
‹
›
Home
View web version