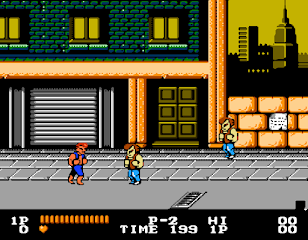 Genre: Action
Perspective: Side view
Visual: 2D scrolling
Gameplay: Arcade, Beat 'em up
Interface: Direct control
Published by: Tradewest
Developed by: Technos Japan Corp.
Released: 1988
Platforms: Nintendo (NES), Arcade Machine, Atari 7800, SEGA Master System, Game Boy Advance (GBA), SEGA Game Gear, SEGA Genesis / Mega Drive
While Billy was distracted, the bandits kidnapped his girlfriend Marian. In battle, you get experience points, for which new techniques are unlocked for you. Three hearts - kick in a jump (A + B + direction), four hearts - the ability to capture the enemy, five hearts - the ability to finish off the fallen (down + punch), six hearts - an elbow (punch, you have to be with your back to enemy). Watch out for knives and grenades - they take a lot of health away. Platform parts require special attention - falling stalactites, moving stones; auto-fall of the character if he comes close to the edge of the platform. An interesting version, although the original on Arcade Machine and the port on SEGA Genesis are easier to learn. Graphics and music are decent.
‹
›
Home
View web version