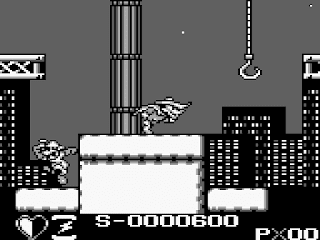 Genre: Action
Perspective: Side view
Visual: 2D scrolling
Gameplay: Platform
Published by: Capcom U.S.A.
Developed by: Capcom Co.
Released: 1993
Platforms: Game Boy, Nintendo (NES), TurboGrafx-16
A wave of mysterious crimes has hit St. Canard and S.H.U.S.H. enlists the services of crime fighter Pato Darkwing to stop her since she looks like F.O.W.L. and her valuable agent Steelbeak are behind the scenes. Six of Darkwing's biggest rivals have been hired to wreak havoc in different areas throughout St. Canard. Darkwing must go and stop those criminals one by one to find Steelbeak and save the city.
‹
›
Home
View web version