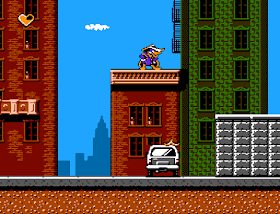 Genre: Action
Perspective: Side view
Visual: 2D scrolling
Gameplay: Platform
Published by: Capcom U.S.A.
Developed by: Capcom Co.
Released: 1992
Platforms: Nintendo (NES), Game Boy, TurboGrafx-16
The same Darkwing Duck, cartoon series hero. One of the best creations of Capcom on the Disney license. This game for us will always be fanned by a light veil of nostalgia, we love it for what it is. The quality of "Darkwing Duck" is truly on top. Very good graphics, Amazing music - these 7 tracks you can listen to endlessly. Seven levels: bridge, where fighting with Kvagoy city - where hiding Utkooboroten, sewage - the lair of the Liquidator, the shipyard - megavolt shelter, skyscraper, where Professor Moliarti experiencing their infernal machines, forest - dwelling Bushruta ship and the main villain - Steel beak. Great, even try out for "Mega Man" gameplay. In addition to conventional gas gun, there are three types of weapons: lightning, flying in two directions, hyper-ball that falls apart on the ground, and the arrow, for which you can cling to reach inaccessible peaks. In the game there are bonus levels, available via a shot at some point. Also in the archive with the game is its prototype, slightly different from the original.

In addition to the main humane weapon, which was the main one in the cartoon, the gas pistol, there are various types of “super-weapon”.