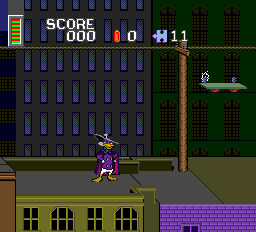 Genre: Action
Perspective: Side view
Gameplay: Puzzle-solving
Published by: Turbo Technologies
Developed by: Radiance Software, Interactive Designs
Released: 1992
Platforms: TurboGrafx / PC Engine, Nintendo (NES), Game Boy
The Supreme Council of F.O.W.L. is recruiting the most notorious criminals of Saint-Canary as assistants to create his secret weapon. The leadership of Shushu in the person of Edgar Klyuwer is compelled to ask for help from the Black Cloak so that he can stop the intruders. The key to solving the problem is a picture kidnapped by criminals. The Black Cloak must clean the city in search of pieces of the puzzle that together make up the stolen item in order to find the location of the Supreme Council and hand it over to the hands of justice.
At the end of the game, the Steelbeak and its assistants fly away in a helicopter, hinting at a sequel, but then the helicopter falls for some reason, and the Black Cloak says: "Criminals never pay, especially if they do not pay for gasoline," thus hinting , that the Steelbeak helicopter fell because of the fact that it ran out of fuel.

The player fights with enemies, collecting pieces of the puzzle, scattered on each of the first three levels. Primary defense is a jump on the head. The player can also use a gas pistol, but only when he has a supply of gas pellets. Depending on the color, there are three types of gas:
Cherrie-bombs can destroy all enemies on the screen and collect all the bonuses.
Also, if you stand in one place for a very long time, the Anvil will fall to the Black Cloak, from which health will not be spent, but life after that is easy to lose.

The game received negative criticism. The profile TurboPlay magazine, devoted to the prefix TurboGrafx-16, awarded the game a rating of 40%, noting an inexpressive soundtrack and weak graphics that do not use all the capabilities of the console.
‹
›
Home
View web version