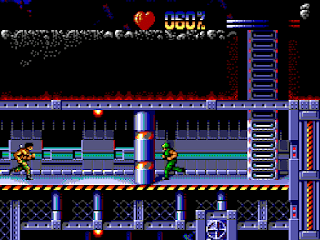 Genre: Action
Perspective: Side view
Visual: 2D scrolling
Gameplay: Platform, Shooter
Interface: Direct control
Setting: Post-apocalyptic, Sci-fi / futuristic
Published by: Virgin Games
Developed by: Probe Software Ltd.
Released: 1992
Platforms: SEGA Master System (MS), SEGA CD / Mega-CD, SEGA Game Gear (GG)
Kyle Reese - that was the name of the hero of this movie of the same name. He was recognized as the savior of humanity from the uprising of intelligent machines. Its purpose was to prevent in the past the assassination of the head of a large project, John Connor - the only one who could stop that very uprising without even starting it. In short, this game almost copies the plot of this glorious Hollywood blockbuster, and every person who respects himself and this film must certainly go through this game.
In the future, humanity was almost destroyed by its own creation - the Skynet computer system that launched nuclear missiles. After the war, robots began to destroy the survivors. However, there was a man who raised a rebellion against machines and taught people to fight and destroy machines. To more effectively destroy people hiding from the sensors and radar of robots underground, models of cyborgs, the Terminators, were developed, and one of them was sent into the past in order to kill John Connor when he was her child. The games are based on films starring Arnold Schwarzenegger.
‹
›
Home
View web version