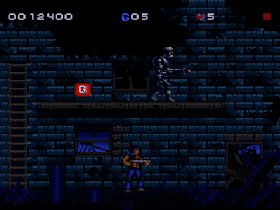 Genre: Action, Racing / Driving
Perspective: Behind view, Side view
Visual: 2D scrolling
Gameplay: Shooter
Setting: Sci-fi / futuristic
Published by: Mindscape
Developed by: Gray Matter Inc., Mindscape
Released: 1993
Platforms: Super Nintendo (SNES), SEGA Genesis / Mega Drive, SEGA CD / Mega-CD, SEGA Game Gear, SEGA Master System
The game is not like the SEGA Genesis version and plays much better. The plot of this legendary film by James Cameron should be known to everyone. After a terrible nuclear war, terminators seized power on earth. They bring death and complete destruction to all living things. The remnants of the people who managed to survive hide in the dungeon and lead a desperate struggle for survival. Thanks to their talented leader John Connor, they are close to victory, but in order to destroy the plans of the resistance, the robots send a terminator into the past. His mission is to prevent the birth of the leader of this terrible war. To do this, he must find the mother of the hero. To protect the woman, the resistance sends its militant back in time. And so we take a cannon and run to destroy merciless machines for the destruction of humanity to the right and left, wherever possible and in different time periods: future, past, present. Of course, the developers could have tried much more, but even so it looks tempting to all fans of this iconic artistic epic.
‹
›
Home
View web version