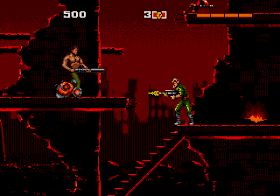 Genre: Action
Perspective: Side view
Visual: 2D scrolling
Gameplay: Platform, Shooter
Setting: Post-Apocalyptic, Sci-Fi / Futuristic
Published by: Virgin Games
Developed by: Virgin Games
Released: 1993
Platforms: SEGA CD / Mega-CD, SEGA Game Gear, SEGA Master System, SEGA Genesis / Mega Drive, Super Nintendo (SNES)
In the future, humanity was almost destroyed by its own creation - the Skynet computer system, which launched nuclear missiles. After the war, the robots began to destroy the survivors. However, there was a man who raised an uprising against cars and taught people to fight and destroy cars. To more effectively destroy people hiding from sensors and radar robots under the ground, models of cyborgs and Terminators were developed. The game is made in films with Arnold Schwarzenegger in the title role.
This time we run Kyle Reese, who was sent from the future 2029 to the present, in 1984, Los Angeles. And all for the sake of saving Sarah Connor, well, and save humanity!
You start with post-apocalyptic levels in 2029, then jump into the past, into the streets of Los Angeles. Only 10 levels. Of weapons you have a quick-fire pistol with endless cartridges, as well as a limited supply of grenades. At the levels are bonuses (such as grenades, first-aid kits, etc.). Between the levels you can watch videos, though the quality they do not have the proper Sega CD.
The game was very good by the way. One of the best about the Terminator.
‹
›
Home
View web version