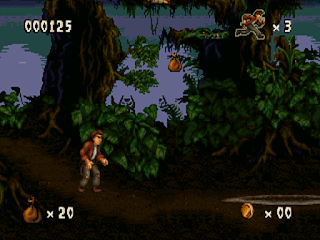 Genre: Action
Perspective: Side view
Visual: 2D scrolling
Gameplay: Platform
Published by: Activision
Developed by: Activision
Released: 1995
Platforms: SEGA 32X, Atari Jaguar, Super Nintendo (SNES), SEGA Genesis / Mega Drive
One of the representatives of the continuation of one of the oldest series of arcade games Pitfall. Released by Activision back in 1982 for the Atari 2600 games system. Also known as Dschungel Boy. The game has changed significantly over the years. And we can play the improved version of the game for the Sega 32x. Traveling through the jungle, Pitfall Harry and his father find what many have long been looking for. But someone kidnaps Harry's father. Now he has to free his father. Making your way through a bunch of traps and enemies. Fortunately, he is well armed. He has a whip and a boomerang. Various representatives of the jungle will pose a threat to Harry. There are also various Easter eggs left in the game.
‹
›
Home
View web version