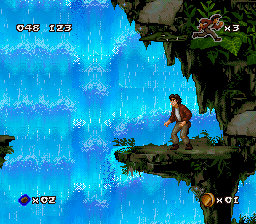 Genre: Action
Perspective: Side view
Visual: 2D scrolling
Gameplay: Platform
Published by: Activision
Developed by: Activision
Released: 1994
Platforms: Super Nintendo (SNES), Atari Jaguar, SEGA Genesis / Mega Drive, SEGA 32X
The hero of the game - a guy named Pitfall Harry, Jr, are looking for their father (the hero of the previous game of the series).
The game is a platformer with a lateral side-skrollinogom and 2D graphics.
Gameplay is similar to the following. Character moves on the locations and destroy enemies; goal of the game - to pass all levels in order to free his father (the protagonist of the original Pitfall!). The game consists of thirteen levels (among them - the jungle, waterfall, desert, etc.).
The enemies in the game - snakes, monkeys, crocodiles and other inhabitants of the jungle; often in the way of character meet a variety of traps (for example, quicksand). At the end of level bosses are - very strong opponents; the level of their health appears a special indicator.
Useful items at levels quite a lot: the stones to successfully fight the enemies, slowing down the clock time, increases heart health Image Harry gives extra life, etc .; there are also a save point.
Despite the similar gameplay from the previous part of game features more advanced graphics, as well as a greater variety of levels, increasing the number of enemies and useful items.

Unlimited Continues - When you are defeated, and the Continue screen appears, just press Start repeatedly.
On the Game Start screen, press the following:
Begin on Level 6 - A, X, A, Y, A, X, Select, Start, and Start.
Debug Mode - After using the level select code, during gameplay hold select and using the control pad, you can move anywhere on the screen.
Infinite Ammo - After using the level select code, hold down select and press ''B'', and you will recieve 99 ammo for every weapon.
Original Pitfall - A, A, A, A, A, A, Select, and Start.
Stage Select - X, Select, A, Select, Y, A, X, and Select.
‹
›
Home
View web version