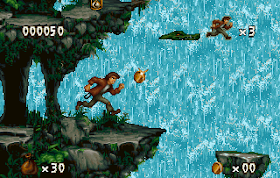 Genre: Action
Perspective: Side view
Visual: 2D scrolling
Gameplay: Platform
Published by: Activision, Atari Corporation
Developed by: Activision
Released: 1995
Platforms: Atari Jaguar, Super Nintendo (SNES), SEGA Genesis / Mega Drive, SEGA 32X
Continuation of the legendary game series Pitfall, released in 1982 for the Atari 2600. Then it was a revolutionary game. The authors of which were inspired by the films about the adventures of Indiana Jones. And it's not strange that the best version of the game Pitfall: The Mayan Adventure was released for Atari Jaguar. Unlike other versions of the game graphics in the game at the highest level, a large number of smooth animation, great sound and, of course, the traditional gameplay. And there is also the opportunity to play the original version of the game Pitfall !, we have more known as "Trap!", But also known as Dschungel Boy, exactly in what it was on Atari 2600.
When Harry Pithfal and his father, while traveling through the jungle, find what they have been looking for, someone kidnaps Harry's father, just as Harry was distracted and admiring the new Artifact. Now Harry must save his father, making his way through the jungle and treacherous traps. It is good not to fight him against the representatives of the jungle with your bare hands.
‹
›
Home
View web version