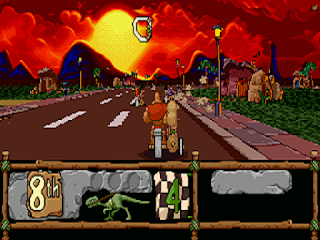 Genre: Racing / driving
Perspective: Behind view
Gameplay: Arcade, Fighting
Vehicular: Automobile, Track racing
Published by: Front Street Publishing
Developed by: Core Design Ltd.
Released: 1995
Platforms: SEGA 32X, 3DO Interactive Multiplayer
Superb prehistoric style arcade racing game made in 3D by Core Design. The game is, albeit not so noticeable, but a continuation of the Chuck Rock game. The game is a motorcycle racing in a circle. In the game, just like in Road Rash, you can beat opponents. There is a bike damage scale and several accelerations. Also, during the game, you can collect bonuses to replenish the bike's damage scale. The world in the game is somewhat similar to the world of the Flintstones, as well as something from the game Herc's Adventures. There are six characters in the game. Some of which have previously appeared in games from Core Design: Chuck Rock and Chuck Rock Junior, Mick Jagger and Jimi Hendrix. The prehistoric race takes place in the world of Chuck Rock. Caveman millionaire playboy Millstone Rockafella organized these races. The winner will receive the Ultimate Boulderdash Bike. The game has a two-player mode.
‹
›
Home
View web version