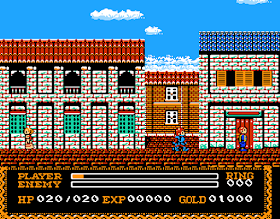 Genre: Role-Playing (RPG)
Perspective: Side view
Visual: 2D scrolling
Gameplay: Action RPG, Metroidvania, Platform
Setting: Fantasy
Published by: Victor Musical Industries
Developed by: Nihon Falcom Corp.
Released: 1991
Platforms: Nintendo (NES), TurboGrafx / PC Engine, Super Nintendo (SNES)
This time Adol embarks on a journey with his friend Dogi. He decides to show the red-headed swordsman his small homeland - the town of Redmont, in the kingdom of Felgan. Here it turns out that the tyranny of the local king has crossed all permissible boundaries, and the lands are again filled with monsters ... The third game in the series has undergone significant changes, mainly due to the side view. The hero now attacks not automatically, but only by pressing a button. He also learned to jump and crawl. In battles with monsters, the emphasis is on melee weapons, but magic should not be forgotten. The location to visit must be selected on the map. The graphics in the game have improved, the music is again at the highest level.
‹
›
Home
View web version