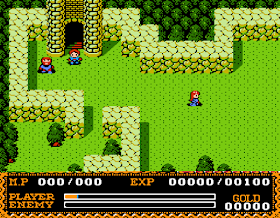 Genre: Role-Playing (RPG)
Perspective: Bird's-eye view
Visual: 2D scrolling
Gameplay: Action RPG
Setting: Fantasy
Published by: Victor Musical Industries
Developed by: Advance Communication Company
Released: 1990
Platforms: Nintendo (NES), TurboGrafx-CD (PC-Engine)
Continuation of the soulful Ys series. To attack enemies, you need to face them, but not head-on, but as if with a shoulder. Remember the importance of saving through the menu, as well as the fact that armor and weapons must first be bought and then put on. For the second dungeon (where permission is needed) it is better to sketch a map. If you are playing the Russian version, it is better not to buy the "Wing" item in the store. Anyway, you will soon receive a staff with the same ability. The world, in comparison with the first part, has increased many times in size: now you have to explore the snow-capped mountains, and the lava-flooded foot of the volcano, and the terrible sanctuary of demons. Great emphasis has been placed on magic, especially in boss battles. Nice game, more advanced version available on TurboGrafx-CD.
‹
›
Home
View web version