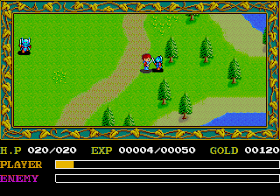 Genre: Role-Playing (RPG)
Perspective: Bird's-eye view
Visual: 2D scrolling
Gameplay: Action RPG
Art: Anime / Manga
Setting: Fantasy
Published by: NEC Technologies
Developed by: Nihon Falcom
Released: 1989
Platforms: TurboGrafx-CD (PC Engine), Nintendo (NES)
This disc is a compilation of the first two parts of the Ys series of games. Both games here underwent qualitative changes - not only graphics improved, but also sound, plus animated clips were achieved. And one more important point is that here two games have been combined into one story, that is, you can not play the second part without first walkthrough first.
Now the prehistory of the first part. Once upon a time there was a Kingdom on the island, known as Esteria (in the last millennium the former prosperous Kingdom of Ys). About Esteri knew the whole world, tk. from its mines mined and smelted quality silver. But when the reserves of mines were exhausted, they forgot about the kingdom. It was to that land that the hurricane of a swordman, Adol Christin, was hit by a good fisherman, went out and gave money. Adol was surprised by the generosity of the inhabitants of this land. The fisherman told him that he would find adventures in one place in the city of Minea. In that city he was told about the Goddesses Ys, who protected the inhabitants from ferocious demons. Their exploits were recorded in 6 books, and if anyone finds them all, he will dominate the Goddesses. The evil magician Dark Dekt is trying to find books, and no one can resist him. And then inappropriately came Adol. The rest you will learn from the game.
So, your task is to find all 6 magic books Ys. The last, the 6th book, is in the hands of the wizard himself. Your only allies are the inhabitants of villages and cities, the rest are demons. In general, it is full of adventures and dangers on the way.
The action of the second part begins with the ending of the first. Which is logical, in principle. Adol Christin moves to the floating island of Ys, where he meets a girl named Lilia. It is she who helps Adol to unravel the mysteries of Ys and finally save Esther from evil.
The game was duly adopted by the community of gamers. Many publications gave high marks. But this is noticeable - start playing and immediately enter into the taste.
The Ys series is known all over the world and came out on a variety of systems. But only in the version of PC Engine CD you can enjoy this translation into English of the second part of the game Ys II, as the disc was completely prepared for the American market (the original market was Japanese, but not often made translations for America), and later it was delivered with a prefix TurboDuo at the time of buying.
And now about the incarnations of this compilation on other platforms. Immediately I will say that the unchanged game appeared on the Wii Virtual Channel service in 2007. The first modified remake for PC was released in 2001 (replaced with commercials on FMV video), the second remake for computers running Windows appeared in late 2009 under the name Ys I & II Chronicles. In 2003, a modified version was released for PS2 under the name Ys I & II: Eternal Story (for Japan only). In 2009, a remake appeared for Nintendo DS - Legacy of Ys: Books I & II (abruptly changed graphics and support for up to 4 players). Well, there is also the PSP rework Ys I & II Chronicles, which also appeared in 2009, more based on the PC remake of 2001.
‹
›
Home
View web version