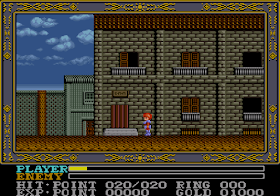 Genre: Role-Playing (RPG)
Perspective: Side view
Visual: 2D scrolling
Gameplay: Action RPG, Metroidvania, Platform
Setting: Fantasy
Published by: American Sammy Corporation
Developed by: Nihon Falcom Corp.
Released: 1992
Platforms: Super Nintendo (SNES), TurboGrafx / PC Engine, Nintendo (NES)
Three years have passed since the action of the first two parts of the games. Adol Christin and his friend Dogi travel to Redmond, Dogi's hometown. Upon arrival, they learn that residents are in trouble. The whole fault is the nearby Valestein Castle. Always ready to help, Adol decides to help residents.
Unlike the first two parts - here we will not see a top view - all actions take place from the side. There are also innovations in the inventory - you can now wear rings that give special special effects.
The game did not suffer from introductions, moreover, I advise you to play it if you like RPG games. Because the graphics are on the level, and the more music!
The third part of the popular RPG series consecrates the journey of our heroes to the city of Rednond, where a mysterious evil has strengthened. This version can also be tested on Genesis. Great graphics, sound, gameplay and an intriguing plot, all this made the game one of the best in its time! By the standards of Snes, it doesn’t look at a particularly outstanding level, but soon extensions for this console were released that didn’t appear on the Sega Genesis, which were made even better and more interesting.
‹
›
Home
View web version