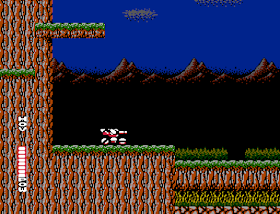 Genre: Action
Perspective: Side view, Top-down
Visual: 2D scrolling
Vehicular: Tank
Gameplay: Metroidvania, Platform, Shooter
Setting: Sci-fi / futuristic
Published by: Sun Corporation of America
Developed by: Sun Electronics Corp., Tokai Engineering
Released: 1988
Platform: Nintendo (NES)
"Blaster Master" is a localized version of the Japanese platformer "Chou-Wakusei Senki MetaFight". Moreover, the Japanese and American versions of the games have the same graphics and gameplay, but for the American release the plot was completely changed.
The plot of the game is as follows. Once upon a time there was an ordinary boy named Jason Frudnick. Of the pets, he had only a cute toad. One day she jumped out of the can, jumped out into the street and jumped to a container with the inscription "radiation", which stood not far from the house. Then the toad ate some of the contents of the container and in the blink of an eye increased in size, dug a tunnel in the ground and crawled into unknown depths. Jason rushed after her and jumped into a hole, at the bottom of which he found some kind of a tank, this combat vehicle was equipped with a powerful blaster cannon. The boy found an armored suit in the cabin and immediately hurried to put it on, got behind the wheel and rushed through an underground tunnel, which soon led him to a strange underworld inhabited by creepy creatures.
In the process of searching for the toad, our hero will have to explore the underworld and defeat the bosses of each of the eight underground levels. After defeating the boss, the player receives an upgrade for the car. The all-terrain vehicle is upgraded throughout the game, gradually turning into an uber car that can swim, fly and ride on walls. Meeting a toad for a guy will not be pleasant: after all, the radiation has greatly changed her mind.
Gameplay mechanics allow players to return to the completed locations (as in "Legend of Zelda, The"), and this must be done in order to complete the game. Another important aspect of the game is the ability of the main character to receive the powers of defeated bosses (as in the "Mega Man" series).
The levels in the game (called Area) are very versatile, each with its own unique features:
1. The game starts from this level. To get to the 2nd level, you need to defeat the boss and get an upgrade that will increase the machine's blaster power, making it capable of killing a monster blocking the passage.
2. A level reminiscent of a medieval castle. To get to the 3rd level, you need to defeat the boss and increase the power of the blaster by gaining the ability to pierce concrete walls.
3. High-tech level. Here, by defeating the boss, you will be able to fly. In order to get to the 4th level, return to the very beginning of the 1st level and fly up.
4. A level similar to a sewer. Here, after killing the boss, the player receives a key to access the 5th level.
5. Underwater level. Since the car is not able to swim, you have to complete the level without it. After killing the boss, the car gains the ability to swim underwater.
6. Ice level. It is difficult to control the machine here, as it slides very much. After killing the boss, you will be able to ride on the walls. To get to the 7th level, you must return to the 2nd level. There is a room with high walls, in which it is impossible to reach the upper door with the ability to fly (there is not enough HOV fuel).
7. The action takes place in the mouth of a volcano. After killing the boss, the car gains the ability to ride on the ceiling. To get to the last, 8th level, you need to return to the 3rd level. There is a section with large spikes blocking the path. By combining the ride on the walls and the ceiling, you will pass this wall and be able to go to the last level.
8. Alien level. There are 2 bosses here at once. Killing them will end the game.
One of the features of the gameplay is the ability to get out of the car at any time and walk through the level just as the main character. Overall, Blaster Master is an outstanding platformer that has received acclaim from many gaming publications: Nintendo Power ranked it 63rd out of the top 100 games, and Electronic Gaming Monthly ranked 184th out of 200 great video games.
‹
›
Home
View web version