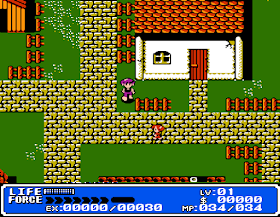 Genre: Action, Role-Playing (RPG)
Perspective: Top-down
Setting: Fantasy, Sci-fi / futuristic
Published by: SNK Corporation of America
Developed by: SNK Corporation
Released: 1990
Platform: Nintendo (NES)
The game was originally released on April 13, 1990 in Japan, and then, in July of the same year, in the United States. Although "Crystalis" did not become a hit in the early 1990s, it is now considered a cult product.
The initial success of the product prompted Nintendo to further release the game on the Game Boy in 2000, which is considered more of a remake than a port, as the updated version introduced many changes to the story, music and other aspects of the game (which even plunged many fans of the original game into disbelief).
"The intricacies of the plot" Crystalis "make us plunge into an alternative history of the Earth. Destructive wars, the death of civilization and its subsequent revival. Technologies are lost, the scientific base is catastrophically undermined, and the long-suffering planet in a second circle is going through all historical periods. Through digital cyberspace we will be transported to those distant times where the minds of people were ruled by magic, orcs lived in impenetrable forests, and heroes fought with swords ... Although, if you believe the alternative history that pervades "Crystalis", then all this awaits us in the future.
The game is addictive from the first minutes (of course, if you are a fan of Japanese RPGs) and does not want to let go for a long time. How did you end up here !? What kind of place is it!? What role is to be played in this unknown world !? Why are they looking at you like a deity !? All this becomes clear as the game progresses: an hour or two, and the world is no longer so alien and the faces seem familiar. According to the good old tradition, the elder of the village will bring you up to date, deify and give you a sword made of the rarest grade of steel, tempered by all the winds and tasted the blood of more than a dozen bad guys. Quest after quest, we chop the unfortunate enemies into cabbage, gain experience, explore the world along the way and fill our pockets with various useful things - medicinal herbs, rings and gold coins.
Gold plays an important role in the game. You will have to give away the despicable metal for new armor, a new sword, magic boots, all kinds of medicines, antidotes and other useful little things. After completing the next quest, you can also replenish your hiking inventory with a cunning magic contraption. And do not forget - the basis of the local universe is based on magic, so you will often have to resort to its services.
The "Crystalis" combat system can be classified as hack'n'slash, i.e. the destruction of enemies takes place in real time. For fans of the turn-based system, this will seem somewhat primitive, but in "Crystalis" there is no other way. This is the beauty and dynamism of the game.
There are many interesting places to explore and visit in detail. In the world of "Crystalis" there are villages and cities, deserts and swamps, and, of course, caves so dear to the heart of any roleplayer. In the settlements, you can talk to the locals, find out the latest rumors, rest and recuperate in the hotel, stock up on medicines from a herbalist and visit a gunsmith. On rough terrain, we take out a tempered sword from its scabbard and prove our superiority in battles with enemies. Strength, coupled with a good dose of magic, will help you in the noble cause of saving the world.
When traveling, it's a good idea to draw a map in order to better navigate the terrain. After all, "Crystalis" is a very long and complicated game. There are 10 zones to explore, dozens of quests to complete, and hundreds of monsters to defeat. The reserve will burst at the seams from many objects, and the head will be buzzing with learned spells. And just imagine - it's all on the NES! Not bad, very good.
The game pleases with nice graphics and animation, and the composer Yoko O., not without the help of magic, weaved his inimitable music into the plot threads.
Verdict. The proportions of the ingredients in the game are kept exactly to the ounce, as it should ideally be. "Crystalis" is a strong JRPG representative on the NES. "
‹
›
Home
View web version