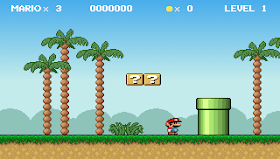 Genre: Action
Perspective: Side view
Gameplay: Platform
Visual: 2D scrolling
Published by: Wiering Software
Released: 2001
Platforms: DOS, Nintendo (NES), TurboGrafx / PC Engine, Nintendo 64 (N64), Game Boy Color (GBC)
The same technical demo that has become popular. If you believe the words of the author, he simply decided to check how smooth scrolling would look on the configuration of his computer.
Actually, this is the same Mario - with mushrooms (there is also a deadly one), turtles and pipes. There are six not very long levels in total. Every detail of the gameplay of the original Super Mario Bros. carefully observed. Sometimes there are slight slowdowns that do not really interfere. Two-player play and save are present.
Graphically (VGA 320x200) the game looks great - it practically does not differ from the official games on the SNES. And you can't say that this is the work of one person.
Soon there were works on an improved engine (Charlie the Duck and Sint Nicolaas), a second life on pirate floppy disks and compilations, Tiger Woods playing this game ... And the most interesting thing is that at that time Nintendo itself did not release a single port on the PC adventures of Mario from consoles. All that players on computers could be content with at that time was a collection of logic toys and an arcade game Mario Bros. Therefore, the reason for the popularity of the platforming game is clear. All in all, it's a great example of how checking an engine can actually be fun, and not just technically. It is a pity that the set does not include a level editor - so Mario would be even more popular.
‹
›
Home
View web version