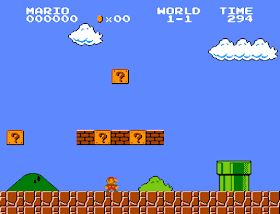 Genre: Action
Perspective: Side view
Visual: 2D scrolling
Gameplay: Platform
Published by: Nintendo of America Inc.
Developed by: Nintendo, Systems Research & Development
Released: 1985
Platforms: Nintendo (NES), TurboGrafx / PC Engine, DOS, Nintendo 64 (N64), Game Boy Color (GBC)
One of the most popular games on the NES console! The game will serve as the starting point of a new franchise about Mario, although Mario appeared in the games long before this one.
The plot of the game is simple (as in principle and in most games with Mario) - to save the Princess, who was captured by the king of the Mushroom Kingdom Bowser.
On the way to your goal will come across many interesting enemies - Kupa turtles, Gumba mushrooms, Spini porcupines, etc. They can be neutralized by jumping on top of them, though not at all necessary (you cannot jump on porcupines, you know). In addition to the jump attack, there is also a fireball attack, but it appears if you pick up a certain amount of bonuses. In total, the game has eight worlds with four levels in each.
The game has long been the best-selling game after Tetris. So to play it, if you have not played it yet, it is just necessary.

The most interesting cheats and secrets of Super Mario

Of course, it's not all the secrets and cheats Super Mario, but this part is enough to try to break the record for the rapid passage of this wonderful game.
‹
›
Home
View web version