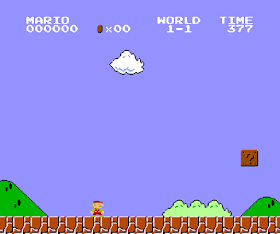 Genre: Action
Perspective: Side view
Visual: 2D scrolling
Gameplay: Platform
Published by: Image
Developed by: Image
Released: 1993
Platforms: TurboGrafx-16 (TG-16), Nintendo (NES), DOS
Not a very good port of the famous Super Mario for NES. Mario goes to rescue his princess, who was captured by a dragon, collects coins along the way. He is opposed by walking mushrooms, flying turtles, cannibal flowers. Enemies are killed by hopping from above. But Mario is not so hopeless. Taking the prize, he can grow and learn to shoot. To get bonus coins you can try to climb into one of the pipes. The game, in principle, has a mode for 2 players, but you can only play by turns. The graphics are good, the sound is simple, but in this game it is not the main thing!
‹
›
Home
View web version