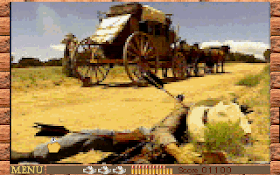 Genre: Action
Perspective: 1st-person
Gameplay: Arcade, Shooter
Art: Full Motion Video (FMV), Live action, Video backdrop
Setting: Western
Published by: IBM
Developed by: American Laser Games
Released: 1994
Platforms: DOS, 3DO Interactive Multiplayer
The long-awaited continuation of a Western bandit "Mad Dog" McCree proved worthy of its predecessor. In case anyone has not caught the first part of the game, we will say a few words about the content and concepts.
In the first part of the "Mad Dog McCree" you getting any easy task to save the provincial American town (duration - the beginning of the last century) from the terror gang McCrea. The bandits seized the city, sheriff's locked in a prison cell, robbed and hurt the local population. On the screen in front of you appear short videos, in which action you actively interfere with the correct six-shooter. The screen moves the mouse cursor to a crosshair. When another villain comes out from somewhere and throws up his weapon, you need to have time to direct the cursor on it and shoot by clicking the mouse button. Here's a get "video shooting gallery." 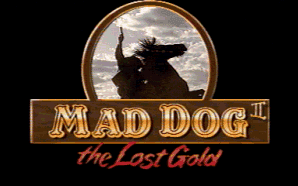 Sometimes you have to move and brains - well, for example, you see your friend's associated with several dynamite in his bosom, and the fuse has already smoldering dangerously close to explosives. What do we do? Shrewdness invited to test their skills and choose one of the options:
- Wait with interest - and suddenly explodes?
- Shot each, that did not suffer waiting.
- A well-aimed shot to slay the cord an inch of dynamite.
This kind of games are called "interactive video" that is, as the movie, the plot of which is formed by the player.
"Mad Dog McCree" was a great success, and then came to him going on (since the end of the first part of "Mad Dog" came away unharmed). The creators of the game is clearly trying to get away from the monotony and templates, and add to the game a little more original. This time you have to start with the "Mad Dog" in the battle for the treasure hidden knows where.
The game begins with the fact that you are sitting on the stage-coach alongside his friends in the first game of the old man. Beautiful weather, good mood. Having nothing to do can be fun shooting a pistol at a milestone, it can suddenly turn into a pleasant surprise in the form of a full bandolier. And suddenly the road you see a dying cowboy. He is so densely feathered istykan Indian arrows that resembles a pin cushion. Stagecoach stop; cowboy manages to give you a piece of the map to hidden treasure, to warn of the danger in the face "Mad Dog" and dies. It is not clear where there are people McCrea, a small skirmish, and you find yourself a winner. Or maybe not find yourself .. From this moment begins the main adventure.
As you probably guessed, the second part of the game your opponents will not only bandits "Mad Dog", but devious, bloodthirsty Indians. And the "Mad Dog", realizing that the usual gun does not leave him no chance, armed with a monstrous multi-barreled machine gun - "mitrailleuse." So exotic enough with the surplus.
Minor changes were made of recharge revolver. If the first part of the game was enough to "shoot" at the bottom of the screen and get a full six-cylinder, now you need to shoot in a small area at the bottom right.
‹
›
Home
View web version