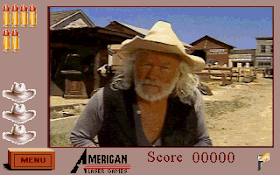 The main character is nameless «stranger», who enters in a small peaceful town, also unnamed, and learns that the daughter of the local mayor kidnapped by a gang of criminals, working on Mad Dog McCree. Old prospector briefly talks about a girl kidnapped and holds the player through training (shooting at bottles on a fence and the like). Then Miner reports that Mad Dog and Co. took over the city. The mayor and his daughter entered the villains in the shelter, the sheriff - in his own prison. At this time, there is the first enemy who wants to shoot a prospector. This enemy, like the others, you need to shoot, otherwise the player will be charged with one of three lives. 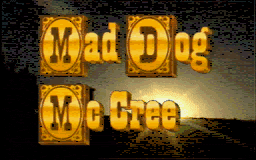 The man goes through several locations, including a saloon with a one-eyed Jack, who hold the keys to the jail cell with the sheriff, a bank, in which the robbery, and the prison farm. Also, the protagonist has to find a card hidden inside the mine, to get to the lair of the Mad Dog (guided by road signs), with the release of the mayor's daughter, and finally removing the leader of a criminal allies, to fight with himself - Mad dog.

Mad Dog McCree is the first of a series of games based on the same simple engine, in which all actions are performed using the six-shooter. Revolver controlled with a mouse or controller. You can eliminate enemies, and choose the path location, reload, shoot the skulls of cows to produce more ammo. Since the beginning of the game opened three levels of difficulty.
The main part of the game is diluted several types of intersections with random criminals, which begins stranger unloaded and must act (shoot and reload) quickly, trying to shoot down the enemy first. If a player enters the witness or fall victim to a bullet removed one life and given a clip with the old undertaker, commenting the player's actions. The stranger three lives.
Arcade edition of the game came with four different hardware settings. Home versions have been designed for Sega CD, 3DO, CD-i and Microsoft Windows. Mad Dog McCree was the first game in a series of releases from the American Laser Games, reprinted by Digital Leisure with updated video and sound, in 2001 on DVD (you can play it through a conventional remote control.)
In 2009, the game released on Wii, as part of Mad Dog McCree Gunslinger Pack. The collection became a sequel, Mad Dog II: The Lost Gold and The Last Bounty Hunter. In 2011, the game was released on a mobile platform iOS. June 14th, 2012 in Nintendo eShop release appeared for Nintendo 3DS. In January 2013, Sony announced the imminent release of the PlayStation 3, including a new interface and increase the resolution to 720p.
‹
›
Home
View web version